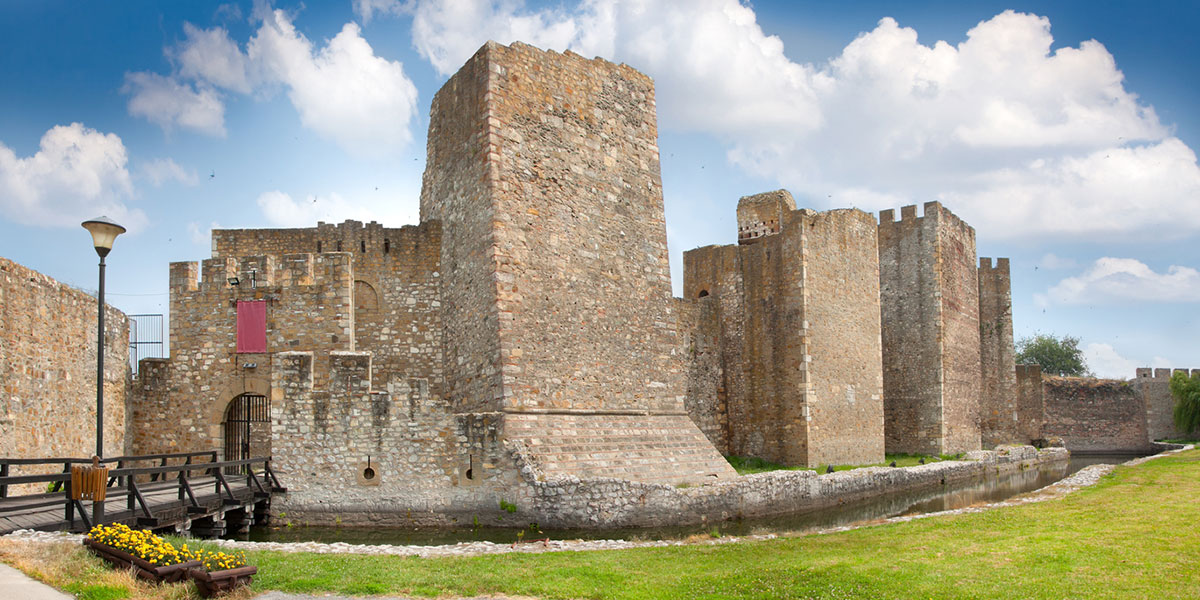 Arrival airport BEG, passport control, take a baggage to bus, meet the tour leader and check in first class hotel in downtown Belgrade. After a short break at rooms and coffee, we will start our sightseeing tour of the city.

Belgrade is one of the oldest cities in Europe and has since ancient times been an important crossing of the ways where the roads of eastern and western Europe meet. The city lies on two international waterways, at the confluence of the Sava and Danube rivers, which surround it on three sides. On foot we will visit the biggest park in Belgrade – Kalemegdan park and the Kalemegdan fortress.

Gorgeous view from the lookout at the confluence of the Sava and Danube and Novi Beograd is an excellent place for photographing. We continue walking to the old city of Belgrade (pedestrian zone) and Knez Mihailova Street all the way to Republic square up next to the National Museum and Theater.

Visit the White Palace located within the same complex as The Royal Palace and it was commissioned by command of His Majesty King Alexander I. In a way back, we will stop to visit the biggest Orthodox Christian Temple in the Balkans – Saint Sava Temple.

After breakfast driving to Smederevo the first stop is Smederevo fortress which is remarkable for the sheer scale of its defenses and for its state of preservation. Smederevo was a Roman settlement on the route from Singidunum to Viminacium. After a walk and history lesson about medieval Serbia you will continue to Viminacium. It is an archeological site near small town of Kostolac. At this archaeological site you will explore remains of temples, streets, squares, amphitheaters, palaces, hippodromes and Roman baths.

Visit Monastery Manasija and Ravanica, medieval monasteries represent unique gems of medieval architecture. Monastery Ravanica will fill you with tranquility, while Monastery Manasija will impress you with its monumentality The monastery Ravanica, with its church of the Ascension of the Lord was built by Prince Lazar between the seventies and eighties of the XIV century. Dinner – Chek in Hotel l Petrus – Paracin. Overnight.

After breakfast, depart to Krusevac a pleasant town that was the capital of Serbia in the mediaeval era. Its excellent museum and Lazarica Church make a brief stop here worthwhile. Founded by Prince Lazar as a capital in 1371, city was home to his mighty fortress the spot from where he and his army set out in 1389 for the fateful Battle of Kosovo. In 1403 as the the Turks were closing in, Lazar’s son Stefan moved the capital north to Belgrade and, in 1454 Krusevac fell to the Turks.

The remains of the medieval capital city are arguably the most important attraction in town. We will visit–Gallery Milic, House of Simic, Lazar town – (Square Fontana- Kula Todora of Stalaca – Mosaic hall in Town Hall – Winery Rubin (degustation) Refreshment and lunch at Stopanja grill house (suckle pig). After lunch sightseeing Vrnjacka Banja spa with break for coffee and tea. Accommodation in hotel Tourist in Kraljevo.

After breakfast dep 08.00am to Žiča Monastery is the joined endowment of King Stefan the First-Crowned and his son Radoslav and younger brother Rastko Nemanjić /later Saint Sava, the first Serbian Arch-bishop/ from the early 13th century /1206-1220/. In 1218 Žiča Monastery was transformed into the seat of the first Serbian autonomous Archbishopric. King Stefan Nemanjić the First-crowned was crowned in Zica Monastery in 1217 as the first King of the Nemanjić Dynasty what made Serbia the sovereign country in the Christian world. King Stefan Nemanjic the First-Crowned died as monk Simon. His relics are resting in Studenica Monastery. The next five Serbian Kings of the mighty Nemanjic Dynasty – Kings Radoslav, Vladislav, Uroš, Dragutin and Milutin followed his example and were crowned in the Zica Monastery until 1253, so it is how the name of the nearby city Kraljevo comes. Zica Monastery is known to have seven doors because of the fact that every time the Serbian King was crowned he had entered a separate door. It was only King Stefan Decanski /Stefan of Decani Monastery, the son of King Milutin/ who was not crowned in Ziča Monastery because it was heavily destroyed during the time of Bulgarian-Tatar invasion at the end of the 13th century, and the seat of the Patriarchate was transferred to the Pec Patriarchate. King Stefan Dečanski was crowned in the Pec Patriarchate on the 6th of January 1322.

Continue driving to north, carved out by the West Morava River, this densely wooded gorge meanders between the steep cliffs of the Ovcar and Kablar mountain ranges for 12miles. Serbian Orthodox monks escaping tyranny during the Byzantine and Ottoman eras found refuge here as early as the 14TH century; at one point over 300 monasteries were scattered through the gorge. Today only 10 remain , linked by a network of roads and hiking paths with spectacular views. Ovcar-Kablar Gorge, boat ride on the lake of Ovcar- Kablar, bus sightseeing monasteries – driving to Topola and arrival winegrower house Aleksandrovic (degustation) and continue to Oplenac Mausoleum Serbian Royal Family, Church St George, King’s Villa, Queens Villa, Peter’s house – lunch at local restaurant. Visiting Topola and Arandjelovac driving to Belgrade. Check in hotel 4*Belgrade. Overnight.

Breakfast at hotel and free morning. Recommend starting a tour of the Old Town to admire its electric mix of architectural styles. Most of the buildings date to the 19TH century, when the city Serbia’s capital but the many gaps left after the destruction of the World Wars have been filled with modern replacement. The Palace of Princes Ljubica is one of the city’s few remaining Ottoman – influenced buildings and make for an enjoyable visit. Afternoon boat tour and lunch at local restaurant. Overnight at first class hotel in Belgrade.

Breakfast. Free day. Evening will be organized in most beautiful, bohemian part of Belgrade, called Skadarlija. This part of town will take you back few hundred years in past. Skadarska street and smaller streets around is forming the old bohemian quarter are popularly known as Skadarlija. After WW2 the area was partially modernized, but in the 1960’s the cobblestones, fountains and streetlamps were reinstated, restoring much of the area’s old-fashioned charm. Fantastic food, best wines and tambourine music will fulfill your experience. Return to the hotel, overnight.

Minimum 10 pax for realization this package.